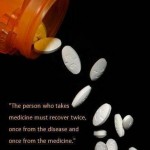 Psychiatric medications are a much talked about subject in mental health and among mental health Coaches and advocates like myself. Why? Because the evidence is mounting that these drugs do way more harm than good. The evidence is mounting that these medications and the professionals (mainly in what is now known as “biopsychiatry”) who want to be legitimized as “real doctors” at their patients’ expense, amounts to junk or pseudo-science propagated by studies, the majority of which have been funded by U.S. “Big Pharma” which of course manipulates the studies to come to the unproven and untrue conclusion that Borderline Personality is a “brain disease” so that they can sell billions of medications. Great for them eh? What about you or a loved one of yours?

In the picture above the quote says, “The person who takes medicine must recover twice, once from the disease, and once from the medicine” which is particularly true when it comes to “mental illness” and psychiatric medications – “medicine”.

There have even been professionals know, in the United States, as they try to address what drives people who commit mass shootings and especially mass school shootings at an alarming rate and they are beginning to conclude that a lot of these “shooters”, among other things, have taken psychiatric medications or psychotropic drugs.

Hers is a refreshing video from the U.K. that even states in one of part of the video that “Psychiatric Medications are contraindicated for the treatment of Borderline Personality Disorder” Contraindicated means that they are not considered relevant or to be a reasonable option. In other words psychiatric medications are NOT the answer to finding recovery from Borderline Personality.