The National Alliance on Mental Illness (NAMI) until recently was reluctant to reveal the source of its funding. But thanks to Sen. Grassley we now can learn NAMI’s sources for Major Foundation and Corporate Support, which you can find here. I downloaded the list of “funders” for 2009. Fortunately, unlike pharmaceutical companies who have revealed monies paid to physicians (see, for example, “Transparency Vs. Translucency in Reporting Physician Payments“), NAMI’s numbers are easy to copy into Excel spreadsheets and analyze. 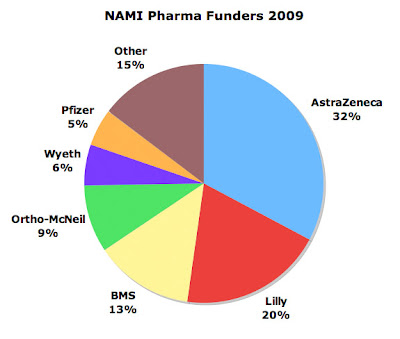 The biggest pharma funder in 2009 was AstraZenca (AZ), which donated $1,255,000.00. Recall that AZ is forced to pay about 400X that amount ($520 million) to resolve allegations that it illegally marketed the anti-psychotic drug Seroquel for uses not approved as safe and effective by the Food and Drug Administration (see HHS press release here). I guess you might say AZ got a large NEGATIVE ROI for its NAMI investment!

Lilly was next on the list having donated $750,500.00 to NAMI in 2009. Recall that Lilly markets Cymbalta and that it recently received a warning letter from the FDA about misleading a Cymablta print ad — ie, re: “omission of risk information.” Cymbalta is indicated for treatment of depression among many other things these days (see “The Cymbalta Buzz Machine is at Full Throttle!“).

The third biggest NAMI pharma “funder” for 2009 was BMS, which donated $506,250.00. Recall that BMS markets the drug Abilify for bipolar disorder. Some time ago, Andy Behrman — BMS’s patient spokesperson for Abilify — went on a campaign against the very product he endorsed for money (see “Andy Behrman, Now an Anti-BMS Spokesperson, Says ‘Ask Your Doctor If Abilify is Wrong for You’“).

It’s a crazy, crazy world out there in the marketing of mental illness drugs!

NAMI Reveals Pharma Funding
Tagged on: AstraZenca    Big Pharma is an industry out to make money not help you    Big Pharma marketing don't let it fool you    Biopsychiatry is junk science and lies smoke and mirrors and all for profit not treatment    Cymbalta Buzz Machine    dangers of psychiatric medication    do we need a pill for everything    Ebooks and Audio by A.J. Mahari    Life Coach and BPD Coach A.J. Mahari    Lilly    long term side effects of psychiatric medication which does not treat or cure anything    mental illness can be recovered from and you don't need drugs    NAMI forced by U.S. congressman to reveal funding    NAMI in bed with Big Pharma    NAMI is not what it seems    NAMI is out to make money and is not advocating or clients    NAMI pharma    Office of Medical and Scientific Justice    psychotropic and anti-psychotics are killing people    what about feeling feelings and learning to cope without drugs    xanax