In not knowing who they really are inside, consistently, when alone, when others aren’t mirroring back what they feel they want or need mirrored back, emotionally, much  like a young child needs this mirroring from his or her mother in order to bond and securely attach. People with BPD are lost. Lost to themselves. Lost often to how they come across to others. They lack a reference point for average healthy relating because they have (until and unless they work through this in therapy) not been able to emotionally grow past arrested emotional development that has happened to them at a very young age. 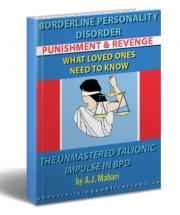 I have an Ebook on this subject, of BPD, punishment and revenge that you can purchase at Phoenix Rising Publications

There is the defense mechanism of splitting, which is triggered, whenever someone with Borderline Personality is relating to someone else and begins to feel as though they are invalidated, not getting enough (and for many until they get into considerable therapy) there isn’t anything that would be enough for them. They try to live through others. They want, need, and expect (consciously or subconsciously) what they want, need, and expected from a parent as a young child, and they want, need, and expect what this is in relationships or relating or a conversation because they do not realize that it helps them to feel real and connected when they otherwise feel inferior or as overcompensation (intellectually especially) superior to others and yet disconnected at the same time.

Disconnection can come when you relate to someone with BPD in a heartbeat and for reasons that won’t make sense in the here and now to others – Loved ones of people with BPD. While it is important to extend some understanding to the person with BPD. It is equally as important to not excuse any abuse, or inappropriate behaviour as being acceptable. Thinking that people with BPD are not responsible for what they say and do is only enabling them, not helping them, and it certainly does not help those on the other side of what many with BPD do not yet understand in terms of how they hurt and effect others.

It is this wanting, needing, expecting, (fill in the blank) that leads many with Borderline Personality to believe (rather erroneously) that they are giving to you (when really projecting out what they want to you to give them) – perhaps even demanding whatever validation or mirroring they seek (rarely ever a consciously spoken request that you could follow or know about) and then when they don’t get what they wanted from you (Loved Ones) even though you have no way to know what they wanted, they get very angry or silent very quickly and either way they punish.

Often when this punishment begins it begins with the person with BPD blaming you for all kinds of things that they have the triggered dissociated idea based on relating to you as Object Other (the longed for bond with mother usually) that you now should just know they need or want and give it to them, whether it makes sense, is part of what is being talked about or what is going on in the here and now or not.

When a person with BPD goes into a the punish mode of emotional dysregulation the loved one has been placed in the role of Object Other (parent) and you become invisible to the person with BPD in such a way that they fail to actually see you but rather treat you in the way that they may have reacted to what was or felt like an abandoning parent in their childhood. You will be in a no-win position. You will be damned if you do, damned if you don’t. Likely and for many loved ones or people on the other side of someone with BPD, this is just so confusing it defies logic and it can provoke you to feel quite a bit that you then can’t express or if you try you will only find it causes the person with BPD to (often) react even more strongly.

People with BPD (until and unless they get enough therapy to get past this) not knowing who they really are – lacking a consistent known stable sense of self – have no inner-container t – o hold their feelings. Feelings that are often triggered in the here-and-now but that are way deeper and more intense then the here-and-now because the person with BPD feels them all the way back to the age at which they experienced the abandonment, trauma, perceived abandonment, that causes arrested emotional development.

What people on the other side of Borderline Personality are likely to experience is not predictable and can be highly individual with each person with BPD though each person will have his or her own patterned way of punishing. They will also try to blame you for what you did to them while they are punishing you. They are doing something to you, silent treatment, withdrawing, raging, screaming, accusing, etc., and telling you that you are doing “it” to them. They collapse both to victim and persecutor at the same time. It can feel crazy-making if you try to approach it rationally because it is all triggered dysregulated layers of intense emotion that lacks rationality in the here and now.

This is a very difficult aspect of BPD for those diagnosed with it and still in or just beginning recovery to gain awareness into and to accept. It goes against all they believe they are, even if they really don’t like who they are. They tend to inflate themselves to seem like they are either someone else or will try to convince you they are such a wonderful person “how could you do _____________ to me?” Meanwhile, the person relating to someone with BPD at this juncture, on the other side, is feeling confused, distanced, perhaps even defensive but commonly somewhat lost as they try to make sense of something that isn’t “real” in the objective sense in the here-and-now. It is “real” for the person with BPD, from their past, but not in terms of “shared reality real” in actual unfolding here-and-now time.

Why people with BPD punish is a complex layered unravelling that takes place when they are triggered and their emotions are dysregulated. Many are not aware of this. Many on the other side of someone with BPD who have no frame of reference for this are hurt, confused, distanced. Frame of reference for it or not, it still distances which then awakens the lion of the person with BPD then feeling invalidated and abandoned. For people with BPD coming to understand this triggered dysregulated emotion and how to not just go with it, and punish others for what they are actually doing, is one of many key corner-stones in the process of recovery. It is painful, formidable and not easily learned or accepted.

There is always hope. Some get there and beyond. Some don’t. It takes a lot of dedication to recovery and to healing and learning more about yourself and coping with the pain to get past this to the regulation of the Talionic Impulse (as I talk about in my Ebook).

People With Borderline Personality and Punishment
Tagged on: borderline personality disorder rage punishement revenge the unregulated talionic impulse    bpd    bpd and splitting    bpd loved ones    lacking empathy    Life Coach Counselor and BPD Coach A.J. Mahari    npd    people with BPD hurt others people and don't care    punishment and revenge in borderline personality disorder    Punishment nad Revenge in BPD Ebook by A.J. Mahari    relating to or with someone with borderline personality and getting blamed and punished check out A.J. Mahari's Ebooks and Audios    the narcissism of BPD need    unresolved childhood abandonment    what can I do about the borderline in my life punishing me    why am I always blamed    why do borderlines punish    why do people with BPD not get what they are doing to others    why is it always my fault    why is my borderline wife punishing me