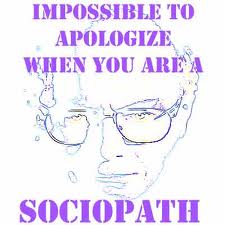 When the criteria is  met for a diagnosis of ASPD, there are two categories, according to Dr. Robert Hare, who works in British Columbia, Canada and has spent most of his career in the study of this disorder which breaks down into two categories of diagnoses:

For an outline of what ASPD is defined as please read my article at: Mental-Health-Matters.com (It will be available Monday December 8, 2014 there.)

How can you recognize a person with ASPD whether they are a sociopath or a psychopath as much as there are subtle but important distinctions between the two? The first thing to consider is whether or not you are someone who pays attention to your “gut-feelings” – to what your instincts tell you. Many people do and many people don’t. Even among people that do this task of recognizing a person with ASPD and catching the red flags and believing ourselves over all the reasons we can think of to dismiss our very acute warning system of instinctual knowing can be quite a challenge.

For people who may believe they have a teen or adult-child with ASPD or a family member, often doctors have been involved and many things will have likely happened that have given you signals and clues. Still, having a person with ASPD, a sociopath or psychopath in your family can be scary, difficult, and overwhelming to cope with. Not to mention very shaming and/or embarrassing. There is also a lot of loss associated with a sociopath or psychopath in the family because you can’t relate to them, they won’t relate to you, as you would have hoped for. Many family members tend to pull away and distance from a sociopath or psychopath in the family because they even report that they are “freaked out” by the cold void of emotion empty calculating eyes looking back at them. They find their ASPD relative “creepy”, “scary” and they become exasperated with his or her behaviour and lack of emotion, lack of remorse and social predatory nature – the lies, the drama, the calculated ways in which they are  manipulated to have hurt them to beyond caring, or close in so many cases.

For those who work for or date a person with ASPD, a sociopath or psychopath, they may not realize what they are trying to cope with until well into a job they hoped to stay at but are now feeling so worn out by a boss or co-worker that they can’t seem to figure out what the problem is – they just know they are way too stressed out. In the case of a relationship, whether it’s in the dating stage, more serious (at least on one person’s part – the non-ASPD person) or a relationship  that may have progressed to marriage and family (more often with an ASPD that is a sociopath – not a psychopath) and then be realized for the source of tremendous pain that it is, very lacking in love. The superficial charm that they use to manipulate and the lies that they will tell you to stroke your ego and weaken your defenses to their own end are seemingly endless.

An old adage really applies here: “If something (or someone) seems to good to be true, it (they) most certainly are.” That’s one big red flag that a lot of people don’t want to actually face. It is often one of the first in recognizing a  person with ASPD that people fail to trust their own feelings, awareness, and instincts about. Of course you get a lot of help with any doubts you raise as those with ASPD will tell you whatever you want to hear to side-step being truly seen for  who they are, by you.

What should you be looking out for and be really attuned to so that you can recognize a person with Anti Social Personality Disorder – a sociopath or a psychopath?

Signs often are many but not limited to the following:

Sociopathic behavior is strongly inherited, so look at problems in the family as a clue to a person’s real personality. Sociopaths often know how to make others believe they are the victim while actually being the aggressor. Sociopaths and psychopaths will manipulate your feelings to the point of gaslighting you trying to invalidate your reality and replace it with you seeing thing their way. For example, they may ask for forgiveness play the victim as to why they did what they get is important to  you to be forgiven about while then later telling you they didn’t say what they said in asking to be forgiven because you did it, they didn’t do anything wrong. It is important to be aware of the almost endless signs and red flags that sociopaths and psychopaths have no conscience. The level of pain you may often feel emotionally may be what helps you to question this along with how they can do no wrong and everything is blamed on you.

Recognizing a person with ASPD – a sociopath or a psychopath means being able to distinguish between what you might want and are hearing and what isn’t feeling right. Recognizing a sociopath or psychopath is also about the degree to which you trust and know yourself as well as how much you trust and are in tune with your instincts. So much of what is listed above can be realized in hindsight after you’ve been used, manipulated, hurt, etc. The real importance here is to recognize and believe your instincts early enough and quickly enough to not fall for the sociopath/psychopaths lies, manipulation, charm, and seeming just too good to be true.

Believe in your own feelings. They are the best gauge and warning system to spot all the red flags of a person with ASPD, be he or she a sociopath or a psychopath.