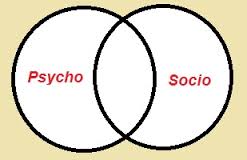 [huge_it_share id=”1″]There are two forms of Anti Social Personality Disorder. One is sociopathy. The other is psychopathy. A person diagnosed with ASPD is either a sociopath or a psychopath. What is the difference you might wonder? Does any difference really matter? Are these personality disorders caused by nature or nurture? Does it matter? In fact, one of the  major distinctions between these two forms of Anti Social Personality Disorder is just that, causation.

Sociopaths, it is now believed, are the result of environmental nurture or lack of nurture experience in young childhood.  Sociopath is the term used when the antisocial behavior is a result of a brain injury or belief system and a traumatic childhood or childhood that did not provide adequate nurture. Whereas those who can be identified and diagnosed as psychopaths are now known to have a more causative learning toward hereditary – meaning nature, not nurture. It is believed, however, that both of these disorders are the result of an interaction and combination between genetic predispositions and environmental factors.

“Psychopaths are born with temperamental differences such as impulsiveness, cortical under-arousal, and fearlessness that lead them to risk-seeking behavior and an inability to internalize social norms. On the other hand, sociopaths have relatively normal temperaments; their personality disorder being more an effect of negative sociological factors like parental neglect, delinquent peers, poverty, and extremely low or extremely high intelligence.”

Anti-social personality disorder results in extremely violent acts. Though psychiatrists often consider and treat sociopaths and psychopaths as the same, criminologists treat them as different because of the difference in their outward behavior.”

(Source for above 2 quotes in italics and the chart above: diffin.com

Dr. Robert Hare interviewed about the Difference between a Sociopath and a Psychopath

Most sociopaths have the capacity to feel some guilt and some empathy where as psychopaths do not feel empathy. Psychopaths can be very good at acting as if they feel as the other person would in a relationship they have an absence of those emotions, almost, if not totally. Psychopaths often create symbiotic or parasitic relations in their relationships. There is nothing real about them for the psychopath except whatever he or she wants them for.

Psychopaths understand, intellectually, human emotions very well. Well enough to play on them to no end and without any remorse or idea even of doing anything “wrong”. They often establish careers and hold down jobs. Whereas getting and keeping a steady job or building a career and stable home is often difficult or not possible for many sociopaths.

Psychopaths are not insane or in anyway psychotic. They do not lose contact with reality.

A high number of ever-increasing sociopaths and psychopaths do not get into trouble with the law and are not murderers or criminals and as such do live among us and present an ever-present danger in many other areas of our lives.

Difference Between a Sociopath and a Psychopath
Tagged on: A.J. Mahari    anti social personality disorder    borderline    brain structure damage and psychopathology    comparison chart between sociopaths and psychopaths both of which fall under the Anti Social Personality diagnosis    coping or struggling    delusional.    Difference Between a Sociopath and a Psychopath    Dr. Robert Hare    excessive risk taking    funtional or dysfuntional    gaslighting    healing from a personality disorder    impulsive or opportunistic violence.    lack of empathy or conscience    lacks empathy    lying    manipulation    mental health    mental illness    narcissism    nature vs nurturs in ASPD    no guilt    no psychedrugs    no remorse    no shame    personality disorders    psychology of personality    Relationships    social predators    sociopaths will isolate you    Tendency for impulsive or opportunistic criminal behavior    toxic relationships    what is wrong with my girlfriend    what is wrong with my husband    what is wrong with my wife    why does my boyfriend scare me