Many with BPD who pinch, push, or slap a partner or person “close” to them expect others to just tolerate that like there is nothing wrong with it because they “couldn’t help it.”

You can’t ever know, anymore than the borderline does, whether or not his or her pinching and pushing will one day explode into the physical molotov cocktail of an adult-toddler most dangerous in a tantrum but not rolling on the floor stomping their feet but rather swinging and pounding away at you.

There is, at best, for many with BPD (until they fully engage therapy and take the time it takes to learn to control impulses and to take responsibility) such cognitively, projective and distorted beliefs that “you” made “them” do “it”. They will feel like a victim after physically abusing you because you: 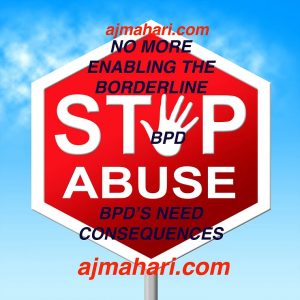 There are many people in prison and with long criminal records and history that form a smaller percentage of both men or women diagnosed with Borderline Personality Disorder.

For this smaller percentage of all with BPD some have committed murder, many more have criminally stalked/harassed, physically assaulted an intimate other or a stranger.

If you add the propensity of a percentage (not so low) of those with BPD that will use/abuse substances and become addicted they have even less chance of controlling the molotov cocktail of borderline lack of impulse control and anger/rage.

They continue to believe that “you made them do it” or in fact, that “you deserved it” for treating them so badly. Projecting out their responsibility abandoned on to you and blaming the real victim.

Borderline externalizing aggression takes many forms. From its lowest, but still abusive level, please recognize it as a deal-breaker. Go not contact. Take care of yourself and any children. Do not downplay borderline violence, battering, or domestic abuse.

It is serious. A simple push, could end up with you falling backwards over a table or something, not being able to break or prepare for your landing and cracking your skull open open on a fireplace, a hard object, the floor or a stair. The borderline, likely, won’t have meant for that to happen, but, any move toward threatening is a move toward crossing that physical boundary (like they cross all other boundaries) and that can be one second or two away from a not thought of consequence of borderline rage and impulsivity.