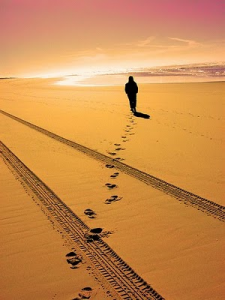 It was always. The pain, the suffering, the abuse, the lostness – the angst. It never stopped. It started ever-so-slowly to come screaming to my conscious awareness. That felt like what had always been, what always was, was beginning yet again in a different and new way. It all began again in August of 1975, when at the age of 17, I physically left behind my family’s crazy dysfunction. Out into the world I plunged like a child diving into an ocean of life who didn’t understand that she had no idea how to swim. Drowning before I was aware of it. Lost before I knew it. So sure of all that I was unsure of. So oblivious to all that I lacked. Clueless. Clueless but feeling free.

Freedom at last, I thought back then. Freedom like a stone. A stone that I would push up the same few feet of my first mountain for 12 years only to have it roll back. Daily pushing the stone up a few feet. Daily having that stone roll back over me, knocking me off the mountain, flat on my emotional back. Day after day reality was obfuscated by my pretentious, swaggering, inverted display of courage. A courage that had at its core the helplessness of a terrorized child. A courage that wasn’t anything more than a narcissistic over-compensation for what was intolerable and vulnerable weakness – an extreme emotional sensitivity so easily shaken to its core.

Walking_wandering_on_footprints_desert I was diagnosed with Borderline Personality Disorder in what could be considered the dark ages of what that really meant. It was 1975 and I was just a few months short of my 18th birthday. I wanted to see a social worker at a local hospital, where I had seen a few before. This time, instead of being given an appointment I was first referred by the out-patient psychiatry department to a psychiatrist in the hospital. I had a short but intense history at this hospital. Most of my history with this hospital unfolded and was documented in the emergency department where I was frequently brought in by ambulance for what was suspected to be a neurological problem. There were also numerous visits that resulted from sports injuries and my burgeoning self-harm practices.

I had no idea why I was being told to go and see this doctor. Up until that time, I was able to get an appointment with a social worker in the out-patient mental health clinic without incident.

This is where it was all about to begin again. “It” was something I had absolutely no understanding about. “It” had a lot to do with how I experienced relating. Relating that really was only barely real within a more narrow context of the lack of it really. A lack of connection. An approach-avoidance dilemma that had a been a theme in my life all of my life.

“It” was about to begin again courtesy of my experience with the first psychiatrist I ever saw. A psychiatrist that I only saw this one time, at his request, not at my seeking him out. Just this one time – just long enough to be summoned and dismissed before I knew what hit me. “It” began again there. “It” began again there in a way that mirrored my lack of relationship with my parents. I had been invited in only to be pushed out. So unclear to me, yet so familiar. Abandonment. Rejection. Invalidation. That psychiatrist would remind me so much of my father. “It” was all just beginning again. “It” was intensifying in a much more pervasive and palpable way than “it” had ever unfolded before.

He was about to give me my first experience with the stigma of mental illness, generally, and Borderline Personality Disorder, specifically. He threw those three words at me with disgust, “You have, Borderline Personality Disorder”. He literally threw my already thick hospital file toward me in an arching fashion and it crashed onto the round table that sat between us with a body-jarring thud. He seemed to garner some pleasure from his provoking display of both punitive power and judgment. He was angry. He was aggressive. He wasn’t kind or caring. He announced that they, meaning, I guess, every mental health professional in that entire hospital couldn’t help me. He inferred I should just go away. I remember thinking, he doesn’t even know me, how could he treat me this way. What had I done to deserve this?

He may not have known me. However from my hospital (out-patient) records he obviously knew more about “me” than I did. I didn’t know much about who I was or how others experienced me. I didn’t know that then, but, that would be become painfully obvious years later.

That was my introduction to a diagnosis not really sought, not professionally given or communicated. That was my introduction to systemic rejection, systemic abandonment, systemic invalidation, and it devastated me. It was devastating in a bland and rather numb way. I was angry as hell but I didn’t really feel much. I wanted to punch his lights out. I remember literally sitting on my hands. I was full of rage. His judgment challenged me inside. It was like he had rung some proverbial bell that I felt compelled to answer. I immediately felt agitated. I had this massive adrenalin rush that I knew would be futile and dangerous to answer. Still my body began to shake. I held my breath. I was reacting to his dismissal of me. I didn’t really understand or care much about what he’d just told me. How could I? There was no explanation. I had no understanding of what he had just told me. In some ways I knew way more than I was aware of. In other ways, I was clueless.

It was the summer of 1975. I was a month away from starting College having just escaped my abusive and dysfunctional family that summer at the age of 17. I had no idea who I was or what I was supposed to do or how to function or relate to people. All I really knew was I wasn’t ever going to know me if I lived with them – my family.

Those three words, Borderline Personality Disorder, were not known then, as they are today. There was no internet. There wasn’t the plethora of books that are out there now. The words though they seemed to be thrown at me in some punishing and rejecting way really meant nothing to me. I had no way to find out what they meant. I didn’t even ask. I didn’t ask the doctor and I didn’t ask anyone else. Though I knew rage well, there were these long periods of quiet desperate suffering deep inside. The times when I felt so far away from any reaction inside. Times when it felt as if I had just curled up into a fetal position somewhere deep inside.

I was lost. I didn’t exist. I was too busy just trying to survive all that I had no skills to cope with to even stop to consider what those three words meant. I quickly and intensely vacillated between feeling four years old and feeling so tough that no one could get the better of me. I was competently-incompetent. Living in a world of illusion and delusion that was for me, my reality.

Where “it” all began again was also the place where “it” was again going to escape the “me” that I wasn’t.

For the next 12 years of my life I wouldn’t ever again think of those three words. I didn’t ever hear those words spoken to me despite seeing numerous therapists over this period of time. I was always a seeker. I continued to seek. Problem was I had no clue as to what it was I was seeking after. I was in search of answers to questions that I hadn’t yet even contemplated. Life in the dark. Life in the bright-light of an enduring darkness.

There was no connection in those 12 years, for me, between those three words and my intense lostness and incredible emotional suffering. Nothing, nothing, existed, really, nothing other than an abandoned and disconnected free-floating anxiety that was the partner of my rage.

Blindly I went on. Somehow, I went on. Failing miserably. Lost. Disconnected. Alienated. Lonely. Feeling the incredible pain of numbness. A searing lack of sensation that alternated with an abundance of sensations, terrifying sensations played out in my body in most distressing ways.

For the next 12 years of my life I saw one mental health professional after another, too many to tally really. Surely, those three words were following me around on paper? No one ever mentioned them again to me in those years. All that seeking. 12 years worth of seeking in circles. Seeking in the dark. Being kept in the dark. A dark most familiar. And yet a dark that was often, at times, also equally most suddenly strange.

Darkness that held both the coldest-warmth and the warmest-cold of significant-insignificance within the lostness of a self aborted. An aborted self that in its own death was fighting for its life.

The dark ages of Borderline Personality Disorder ushered in my failure to transition successfully through yet another stage of life development. I remained, oblivious that I was, a frustrated and wounded child in search of a mother.

Where It All Began Again – Excerpt A.J. Mahari BPD Memoir
Tagged on: A.J. Mahari    A.J.'s childhood the invalidating environment abandonment and the consequences    Borderline Personality Disorder Recovery    BPD and abandonment    BPD and Loved Ones Coach A.J. Mahari    BPD memoir up coming    courage to recover from BPD back in the darkest times for those diagnosed with Borderline Personality Disorder and then sent away being told there was no treatment    DBTskills for Borderlines and Loved Ones    have BPD and parents with BPD and/or NPD    mental health    mental illness    mentally ill parents and dysfuntional abusive family of origin issues    mindfulness    radical acceptance    rejection    understand more about BPD whether you have it or are a BPD Loved one    Where It All Began Again - Excerpt A.J. Mahari BPD Memoir