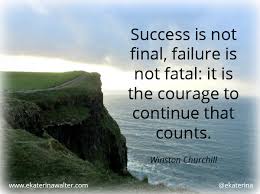 What do you think first and most often when you hear the word failure? You probably are thinking that you’re not good enough and that you should give up. Do you ever find feeling that you’ve failed in a negative black-and-white way leaves you with a lot of (if even temporary) self-doubt? Maybe even really down on yourself in a devaluing and critical way? What if you were to temper or balance your reaction to what feels like or even is, in part, failure, and realize its ability to teach, empower, and its importance in your ultimate success. Because failure can involve those thoughts and emotions, failure can also make us stronger or wiser.

A simple definition of failure is: An act or instance of failing or proving unsuccessful; lack of success.

When you think of this definition of failure, you may find it a helpful reminded of Thomas Edison, the inventor of the light bulb. While there are many conflicting stories of how many times Edison “failed” at inventing the electric light bulb, most agree it was in the thousands of “failed tries” before he found the right combination of materials. However, all those so-called failures led to Edison’s eventual success.

One of Edison’s most famous quotes is, “I have not failed. I’ve just found 10,000 ways that won’t work. I am not discouraged because every wrong attempt discarded is another step forward.” 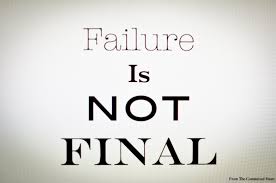 If you adopt this same attitude, you’ll overcome your feelings of failure. You’ll be able to see how each so-called failure is really a part of the process of your growing, learning, recovering, becoming more empowered, achieving your goals – finding what you want and need to shift to find the success personally and or professionally that you may not yet have found. Trust the process.

Robert Schuller stated these famous words, “Failure doesn’t mean you’re a failure; it just means you haven’t succeeded yet.” Again, this quote supports the empowering reality that so-called failure is a part of the process of reaching and achieving success. As much a part of that as mistakes are not wasted time but are rather growth opportunities.

Henry Ford said, “Failure is only the opportunity to begin again more intelligently.” You see everything except giving up or failing to get up if you fall down, or apologize if you wrong someone, or stop trying, stop believing in you, cannot be this so-called failure the way that most people tend to think about it – as the opposite of success instead of part of the process of getting to success.

These quoted wise words from these wise and successful people, I hope, will begin to help you accept and further understand the power of failure.

The truth is, you only fail when you give up! When you keep trying until you’ve found the answer or the solution, you’re successful. We can’t say Thomas Edison, Robert Schuller or Henry Ford were failures right? Sure, they were unsuccessful many, many times, but they didn’t give up until they found the answer, the right procedure or the right materials to shift from the process to the end goal of success.

In case those quotes weren’t enough to make you believe failure has a positive power and strength, here are some more you might relate to:

“Failure is an event, never a person.” – William D. Brown The next time you try your hand at something and don’t achieve the desired result immediately, remember failure is an event; it’s not you. It’s about the process of what you are seeking to know or learn or do.

Just because you’ve failed once, twice or 10,000 times at something, it doesn’t mean you’re a failure. You only fail when you stop trying.

Still not convinced? Consider the following: “You always pass failure on your way to success.” – Mickey Rooney What do these words mean to you? No matter what you’re trying to succeed at, whether it’s a sport, project, career, invention, healing from your past, coping with recovery and/or a mental health challenge of a physical challenge, or at school, there will be times when you don’t succeed. But you mustn’t let that stop you from reaching your goals, dreams, and desires.

The common thread among all these famous people and their wise words is the same. You can’t have success without failure. Never give up and never stop trying. There is power in failure, you just have to give yourself a chance. Keep trying, keep failing and soon you’ll find true success. Or another way to put it would be keep trusting the process of what is so-called failure and know and believe it’s not as you’ve thought it was and it doesn’t mean what you’ve thought it did. That so-called and thought of “failure” is a part of getting from where you are to where you want to be.